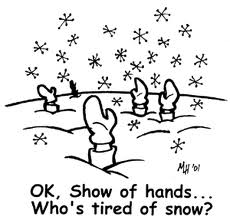 Well, according to my School Reach message logs, today was our fourth snow day of the year.  We've also had seven late starts, one of which was immediately followed by an early out, due to windchills and road conditions.  We had one late start prior to Christmas.  The rest have been since January 21st.  Up 'til then, winter had taken its time getting here, and it was almost looking like another nearly snowless winter like last year.  Since then we've had snowstorms, blizzards, and freezing rain storms to make up for it.  In my little corner of the world, it's meant three cancelled or rescheduled speech meets and a rescheduled Knowledge Bowl tournament today.  I'm done.  I'm ready for spring.  Not so excited about the mud bog that forms in my front yard, but I'll deal with it...
The aforementioned kitchen reno has been rethought and scaled back, but still in the works.  I did get a new bedroom door in the meantime.
I'm fighting off a cold, and Thing 4 is on his second round of antibiotics for a double ear infection.  Poor kid.
Grad classes are tougher this semester.  I do feel like I'm learning something, which is always a good sign.  I need to write here more though.  For fun.  And read stuff besides textbooks.  I've got a good ol' case of the winter blahs.  Yuck.
Posted by Unknown at 7:12 PM 1 comment: